Warning: Invalid argument supplied for foreach() in /home/annapa6/public_html/wp-content/plugins/seedprod-coming-soon-pro/extentions/mailchimp/mailchimp.php on line 121
 Christmas won't be the same this year - Positive Parenting with Anna Partridge

My 9 year old daughter told me gently a few months ago while I was sweeping the back path – thankfully out of earshot of my other children – ‘I know Santa isn’t real Mum and I am OK about it.’

I wasn’t expecting it right then, right at the very moment and I reeled back a little. I had to be honest with her and tell her she was right. She WAS right after all. I didn’t want to lie to my daughter so I just agreed. We made a little pact not to tell the others just yet.

I love playing Santa and I love the magic of what it means to wake up in the morning and discover someone has left you magical presents and exactly what you have asked for (well mostly – except when we forgot to build the dolls pram and so she got the doll and not the pram!).

When I was little, I learnt that Santa was once called Saint Nicholas. As I grew up and without giving it too much thought, I followed the tradition of Santa coming to our house at Christmas time to give presents to my kids. It was part of the magic of Christmas and the tradition – along with going to church to celebrate the birth of Jesus.

But this Christmas, now my daughter has wised up, I questioned who this Santa guy was really and why exactly we give presents and I wish I had of known this all before my daughter asked me about Santa.

So who is Santa anyway?

I was surprised to learn (or relearn) that Santa Claus has religious significance and was a real person, or perhaps more fitting a combination of people.

Here is a simple explanation.

Santa Claus is largely based on Saint Nicholas. Nicholas was a Greek Christian bishop in the 4th Century in the roman town of Myra (now Turkey). His parents died and he was left with a lot of money. He shared his money around, especially with the poor. One of the stories of his generosity is that he threw three bags of gold through a poor nobleman’s window to be used for his daughter’s dowries to save them from a life of prostitution. The gold landed in a stocking that was hung by a fireplace to dry and was found as a present in the morning (hence the stocking by the fireplace I guess!). Or another take to the story is that Nicholas put it in a stocking to threw it in, hence why stockings are left out for Santa to put presents in.

Because of his kindness and service to the poor, he was named patron Saint of children and sailors. Saint Nicolas died on 6th December sometime between 345 AD and 352AD and he was remembered by people exchanging gifts. In the 16th Century, this day and gift giving was discouraged in the Christian faith and the introduction of the tradition of gifts being delivered by the Christ Child was introduced and the day moved to 25th December. The Dutch sailors were not keen to give up their Saint Nicholas traditions and so the birth of Sinterklass occurred , eventually translating into the word Santa Claus.

There is also the Germanic god Odin who came with the advent of Christianity to Europe in the middle ages. He had a long, white beard and took his gray horse for nightly rides to ensure children said their prayers and practiced good behaviour. So I guess this is why kids have to be good at Christmas time. Another legend mentions Pagan God Woden (potentially the same God as Odin) who was said to fly in a chariot looking over village children to see if they were bad or good. 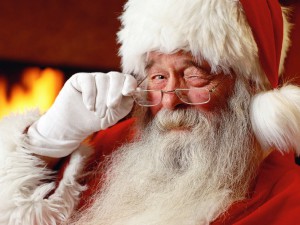 So now, we are left with a combination of all of these legends. Santa (Saint Nicholas) comes in a sleigh (Pagan God Woden) to give presents to good children (Odin) and leaves them in stockings (Saint Nicholas). We then go to church to celebrate to birth of Christ’s Child (Jesus). It just all happens on the same day.

Through the years, Saint Nicholas’s appearance has changed. Saint Nic was originally depicted as a bishop in robes, now Santa appears in a red and white suit, with rosy cheeks, a fat belly and has many ‘helpers’. His appearance today is largely due to an editorial cartoonist from the Harper’s Weekly magazine, Thomas Nast who from 1860 to 1890 bought a human appearance to Santa, put his home in the North Pole, gave him a toy workshop and started the ‘nice or naughty’ list. In 1890, a department store owner James Edgar dressed up as Santa in Massachusetts, USA and the idea spread. In 1903, his appearance became more alive with his depiction in a film and so his appearance has stuck.

James Edgar has a lot to answer for as this is when the consumerism and tie in with the shops first started – in 1890. This is when it became all about presents and little about presence. I doubt he knew he would start such a tradition for consumerism and excessive shopping at Christmas time and if the tradition of the real Saint Nicholas and his generosity to the poor would get lost in our need to buy, buy, buy.

I wish I had of known this history before my daughter asked if Santa is real or not. My new answer is YES! We celebrate the generosity Saint Nicholas showed to the poor many years ago by exchanging gifts with each other. He was a real person and we are keeping this analogy of giving to help others alive, but I may still have to tell her he is not really in a red suit, doesn’t fly through the air and doesn’t come down our chimney.

Want to be part of the BombardedMum community? Sign up to the weekly newsletter here.

Anna Partridge is mum to three beautiful, highly spirited children aged 9, 8 and 5. She created BombardedMum to share the inspirations and joys about raising the next generation and to allow mums to think about the ‘big picture’ of parenting by providing tips and advice to instil the right habits, values and beliefs in their children from the start.

Anna is a Parent Educator, holds a Bachelor of Education (Primary), a Bachelor of Communications and is a freelance parenting writer. She is privileged to work alongside families to create calm and balance, help raise confident and resilience kids and maintain strong and connected relationships. Anna offers private parenting and family coaching at www.annapartridge.com.

← My child is so angry!
Sibling rivalry: a new experiment →