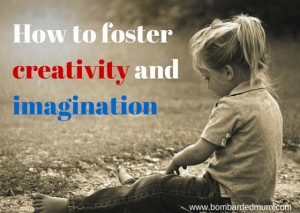 Children are born with a vivid imagination and full of creativity. This is nature at its best and our job as parents (and teachers) is to nurture it – but why and how?

Creativity and imagination is key to developing a child’s social skills, decision-making skills, confidence, self-expression, independence and resilience. It can also help with developing problem solving skills and provides our child with a place to escape from the everyday pressures of rules, regulation and the fast pace lifestyles we now lead.

By the age of 2 and 3 years, our child’s imagination starts to really fire up. If you have spent time in a preschool classroom or even in your own house with kids this age, you will know the magic that can be created by a plain, old cardboard box. Kids really can create life from anything – by putting toilet paper rolls on a box to make arms, dangling bits of string for legs and poking sticks in for eyes this box is now ‘real’ and often even gets given a name and a voice. Same if you give them an old sock – they will come back with it turned into a snake or other wriggling, ‘live’ creature with eyes, mouth and nose.

Their dreams become more vivid at this time and imaginary friends start to pop up. At 3, my son had an imaginary friend called Dolly who would meet us in a certain tree that we had to visit every day and just listening to the stories he made up with Dolly while we were at the tree were priceless.

If you give a child paint at this age, the possibilities are endless. They can create scenes out of their head and put it on paper and make it look completely real – even if only to them. Their imagination and creativity are flowing in massive proportions.

So how do we keep that imagination and creativity going?

Find an old tub and put paint, pencils, buttons, sticks, boxes, glue, paper – anything that you can find around your house you don’t use anymore. This will be your kids ‘go to’ box to create whatever they want to create. They can use their creative freedom to imagine and make whatever they like.

This tub (or another one) could have toys that allow children to use their imagination when playing such as lego, plain blocks, cars or trains and train tracks.

2. Let your kids be bored

We don’t need to fill up every bit of spare time for our kids with after school activities, planned sport or planned trips to the zoo.

Our kids need time to be bored so they can use their imagination and creativity to make up games or design tunnels out of blankets and pillows in the lounge room or to go outside and make a fairy garden out of old sticks and pebbles.

Who’s afraid of letting their kids paint in the house?? If you said yes, I’m buying you a paint box, some plastic to put under the table and some courage! Often the best creations come out of mess! If we teach our kids how to clean up and set the expectations around them cleaning up after themselves – mess is gone in no time at all. AND think of the fun the kids have had making that mess to get to their creation. Mess = creativity and imagination. 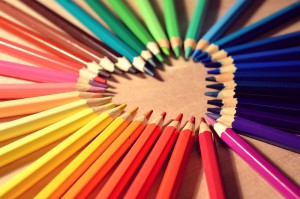 4. Turn off the television and computer games

Children have their own world of imagination in their heads – once they are spending all their time in a new imaginary world on a computer or on the television, it takes over their natural world. One of the activities I love doing with school kids in about Year 1 is to have them write stories about ‘The night my toys came alive’. Children who have watched lots of television and then have all the characters that go with the certain TV shows can only recreate the scenes they have watched. Their imagination has been shaped by the scenes on television or the worlds from their computers.

My daughter has just started Kindergarten and it is amazing to see the transformation into an ordered, school environment where kids are expected to do the same art work or worse, colouring in. Colouring in limits our kids imagination by giving them a piece of paper with the lines already drawn and telling them to do ‘busy work’ by putting some colour in between the lines. They are confined by lines and boxes.

If you give them a blank piece of paper and colouring pencils, they can create their own picture and still colour it in. It gives them freedom of expression and opens up the channels of creating and imagination again.

Nature has the best toys! With sticks, leaves, grass, muddy puddles and pebbles – kids can create the most intricate, imaginary worlds for fairies and other creatures to be a part of. Sometimes on the playground and even with my own kids, I sit and listen to the amazing games the kids can get into just by building their worlds from nature. Nature also has trees to climb and caves to explore that spark imagination. 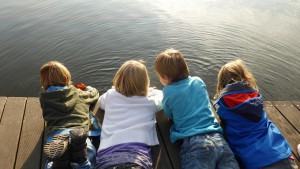 7. Tell made up stories

One of the best ways to spark imagination is to tell children made up stories – not from a book but just out of our heads. My husband has created a whole world with my kids using a character Bertie the Beetle. This beetle goes on great adventures through different lands and there are now many characters they meet along the way. My kids love adding to the stories and creating this imaginary world together.

It can take time to create something… have down time in your week and on your weekend where you can just be at home and get out the Imagination Tub or go for a walk through the forest with no place to be or send your kids outside to just explore and find their own imagination and creativity right there. It is easy to schedule in play dates and after school activities each day, however some time at home equals time to create and imagine.

9. Have the world’s best dress up box

Dress ups are all about creating imaginary scenes and places. It doesn’t need to be expensive fancy dress – it can be from your cupboard or a cape made from an old sheet or piece of material. Sheets and material can be turned into so many different creatures…your child will tell you! 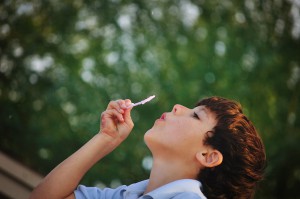 There is nothing more magical than a sky filled with bubbles and little children running around after them. Bubbles themselves create imagination for our children and get them outside to be in the fresh air and playing.

In our ‘hurry up’ culture where everything is moving at a million miles an hour, ever hour in our day is accounted for and there is a jam-packed curriculum that must be met at school, creativity and imagination are being limited.

A world with imagination and creativity is exciting and magical. By fostering your child’s imagination, you are showing your child a world where magic can happen and dreams can be created – they will have more choice, endless possibilities, self-confidence, well developed social skills and problem solving skills.

Now, enjoy the wonder and awe of a house full of creative, imaginative children!

Anna Partridge is a Parent Educator, School Teacher and freelance writer. She is also mum to three beautiful, highly spirited children aged 10, 8 and 5. She created BombardedMum.com to share the inspirations and joys of raising the next generation and to allow mums to think about the ‘big picture’ of parenting by providing tips and advice to instil the right habits, values and beliefs in their children from the start. Anna is privileged to work alongside families to create calm and balance, help raise confident and resilient kids and support strong and connected relationships. Look out for Anna’s new program How to Yell Less and Enjoy your Kids More: 5 days to becoming a more Positive Parent out late March 2015.