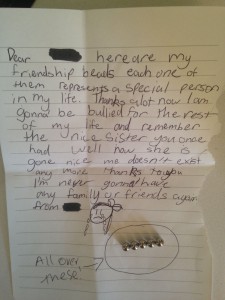 When I thought it was a good idea to have three kids in four years, it never crossed my mind that I would spend up to 80 % of my days sometimes dealing with sibling rivalry.

My kids fight. They just do. They don’t get physical and I am not concerned they will actually inflict physical or mental trauma on each other and there is no bullying going on, but they fight, every day. Maybe two or three times every day and even more in the school holidays.

And it drives me insane!

Why do they see the need to fight?

It is not as though my husband and I fight all the time and are role models for the behaviour. My only thought is that it is a primal behaviour. If someone has got something of yours, you want it back. If someone gives you one of those looks, you don’t like it. If your brother gets into your space, oh my goodness and so the fights roll. I actually think it has to be some part of an animal instinct to protect yourself and your possessions.

And so I become adjudicator. I decide who is in the wrong and who is in the right and there are consequences for behaviour. But sometimes I just let it roll. Last weekend was one of these sometimes.

Child A had taken Child Bs five tiny ball bearings. Child A was adamant they were hers and she had been given them for her birthday – Child B was adamant they were his as they were out of one of his toys. I suspect Child B was right but what pursued was quite an experiment. It was 7.30am on a Saturday morning and the backwards and forwards lasted for a good few hours. It finally culminated in a note from Child A to Child B to say how their life had been ruined and they were making them choose between their family and friends.

My husband and I made a conscious decision to leave them to sort it out. If we had of jumped in, it may have stopped it for a minute but they would not have learnt any strategies for dealing with conflict.

They were learning problem solving skills – what to say to each other, how to say it and each of them ultimately wanted to resolve the situation. It was interesting to watch. Once they had had it out all over the house, they separated themselves. Gave each other time to calm down and they apologised to each other and moved on. That’s when we stepped in. We asked how they resolved the situation, what lessons were learnt and by that afternoon the tiny balls were lying alone on the playroom floor and the kids were getting on like magic. 1 to us!

Research shows that sibling rivalry is not all bad. The University of Cambridge Centre for Family Research examined the impact of sibling rivalry on children’s cognitive and social development between the age of two and six. The good news is it found that children who fight learn about regulating their emotions and how they can affect the emotions of others – they also build up emotional intelligence. This all prepares our children for important relationships when they are older.

I often think we jump in too soon. But it is inevitable they will start a fight right as we are doing the final touches on a morning routine to exit the house at exactly 8.06am to get to school and work on time. That is when I do jump in and I break up the fight and then generally spend the car trip telling my kids why they need to be nice to each other and how siblings should love each other.

A few weeks ago, instead of telling them, I spontaneously started a morning car game. Each of us had to start a sentence with ‘I love you because…’ and say why we loved each person and then ourselves. It has calmed our car trips down no end and my kids now know that when we get to the top of the hill with the traffic lights, they start the ritual. We each leave feeling loved and start our days in a happy place. And for the minute, it has stopped the fighting in the morning. Hooray!

I have tried most things to stop the fighting and my conclusion is that a pattern interrupt works the best. A pattern interrupt is something that is unusual to what would normally happen. I call one child in to help me make dinner or put them all on their bikes and go for a walk or jump in the car and go to the park or send one child to have a bath, walk the dog or sweep the outside path. I create an activity that will change the tone of what is going on and they quickly forget what they were fighting about. Once it is finished, we talk about it and figure out lessons learnt and strategies to get through the conflict.

It is bad when there is physical aggression. It is also bad when there is bullying behaviour going on – when one child (generally the eldest) is singling out a younger sibling and picking on them. A study conducted by the University of New Hampshire looked at date available from 3,6000 children aged between 0 and 17 years. It found that 32 per cent of these children were being bullied by a sibling and it was leading to mental health issues including depression and anxiety.

So now I must remember, the next time my kids are fighting, they are learning valuable strategies to solve conflict on the playground and beyond and are also developing emotional intelligence. Must remember, must remember! And even more so with the holidays now here.

What do you do when your kids fight?

Anna is a Parent Educator, holds a Bachelor of Education (Primary), a Bachelor of Communications and is a freelance parenting writer. She is also a mum to three beautiful, highly spirited children aged 9, 8 and 5.

Anna created BombardedMum to share the inspirations and joys about raising the next generation and to allow mums to think about the ‘big picture’ of parenting by providing tips and advice to instil the right habits, values and beliefs in their children from the start. She is privileged to work alongside families to create calm and balance, help raise confident and resilience kids and maintain strong and connected relationships. Anna offers private parenting and family coaching at www.annapartridge.com.

← Christmas won’t be the same this year
Travel with kids: 5 things to do in Rockhampton →