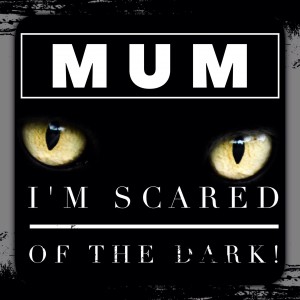 Every parent at some stage will hear the words – ‘I’m scared of the dark’.

Right now, my 5 year old daughter is going through the ‘scared in the dark phase’ and its tricky. She finds it hard to settle herself into her bed at night, doesn’t want to walk up the stairs to the second floor by herself at night and is even scared to walk down the hall into our bed if she wakes up in the middle of the night.

It is most common between the ages of 2 and 5 when children’s imaginations are vivid and they can not separate reality from fantasy.

I must confess that I am still slightly scared of the dark as an adult and so convincing her there is nothing to worry about is sometimes difficult!

When I was a similar age to my daughter, I remember lying in my bed during a thunderstorm and every time there was lightning, I convinced myself the hat stand in my room was actually a ghost. There was a hat on top and a coat a little way down and when the lightning hit it, it really did look like a ghost – maybe I had just watched too many episodes of Scooby Doo, but I was genuinely scared.

I am not so much scared of the absence of light now, but what might be in the dark that I can’t see. There is actually a medical term for being scared of the dark – nyctphobia. I wouldn’t say I am nyctophobic or have a disfigured perception of what would, or could happen in a dark environment, however I don’t like to walk through a dark alley or into a forest in dead of night. And the idea of being in open water at night is too scary.

So when my daughter came to me last week and told me she was scared of the ghost she had just seen at night in the hallway who ‘had a long black coat, something over its head and all you could see was its eyes’ – I had a flashback to my own experience and could feel her terror.

Perceived or real, in the mind of a 5-year-old whose imagination is in overdrive, it can be a very scary ordeal.

The best thing you can do is be respectful for your child’s fear of the dark and show you have empathy towards them – and not dismissing it. This will help with accepting and acting on fear later in life without feeling guilty of ashamed.

She wasn’t able to find her own strategy for being scared of the dark and so we had to be creative to help her – I had to think outside my own perceptions of the dark and find a way to ease the fear for her.

This is what we did. 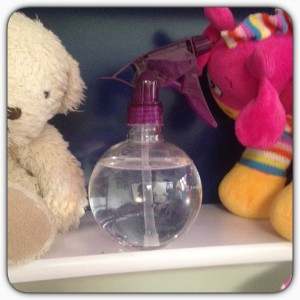 Yep, it’s a spray bottle next to her bed.

But not just any ordinary old spray bottle!

This spray bottle contains ‘magic potion that gets rid of ghosts in the night’.

To make the potion, her and I went into the garden and found every prickly weed, pieces of grass, ‘not pretty flowers or that would attract them’, nuts, berries and bark and soaked it in water while we went to the shop and bought a spray bottle.

When we got home with our spray bottle, we strained the soaked plant material and the ‘magic water potion’ is now in the spray bottle. My daughter has sprayed it every night from one end of the hall to the other (on the mist spray to limit carpet damage) and so far so good!

Through the use of a spray bottle, we have empowered her by giving her a tool and some reassurance that she will be OK in the dark and safe from the ghosts. The empowerment tool could be anything physical and could even just be a mental strategy. It will work better if you make it or create it together and it resonates with your child’s imagination and creativity.

Another tool we thought of together is saying ‘shoo shoo’. Sometimes in the night, she comes down the long hallway to our room and gets in for a cuddle. With the advert of the recent ghost she has been terrified of the thought of waking up and walking down the hallway in the dark – even though she has done it for two years already with no problem. So I suggested she say ‘shoo shoo’ on her way down the hall to scare away the ghost. Being woken to ‘shoo shoo’ at 3am is not the most pleasant awakening for us, but it does scare the ghosts (and the neighbours!) for her.

I follow Natural New Age Mum on social media and one of her threads a few weeks ago was a mother asking how to get rid of ‘monsters who live under her daughters bed’ and being scared of robbers at night.

Some of the great suggestions to get rid of ‘monsters and robbers’  were;

Some of the more long-term, underlying thoughts on children being scared of the dark are;

Another researched idea to help with being scared of the dark is visualisation. During a quiet time in the day, have them recreate what the scene looks like when the lights go out with their own toys or get them to draw it and have a more visual picture of it and discuss how you could change the picture with them. When you put them to bed, remind them of the scene and how they can physically or mentally change it.

* It is important to know that fear of the dark should only last a couple of weeks at a time. If it lasts longer, or is a reoccurring theme it is best to get some additional help from your doctor or medical professional to see there is no underlying concern.

What have you done when your child is scared of the dark?

Anna Partridge is a Parent Educator, school teacher, holds a Bachelor of Communications and is a freelance parenting writer. Anna is also mum to three beautiful, highly spirited children aged 9, 8 and 5. She created BombardedMum.com to share the inspirations and joys of raising the next generation and to allow mums to think about the ‘big picture’ of parenting by providing tips and advice to instil the right habits, values and beliefs in their children from the start. She is privileged to work alongside families to create calm and balance, help raise confident and resilient kids and support strong and connected relationships. Anna offers private parenting and family coaching at www.annapartridge.com

11 Responses to Mum, I’m scared of the dark