It’s all happening. We haven’t been to the doctor for almost 9 months and for the past month, we have been at least once a week. And for some of the most bizarre things!

We have had a broken arm, gut parasites and planter warts.

During this past month, I have also hit some pretty good mum lows.

All in a days work for a mum! Not – how disgusting.

I have also learnt a lot about how the human body works and all about these weird and wonderful aliments. Here is the sharing on planter warts, parasites and lessons from a broken arm.

Everything you need to know about planter warts;

And now on parasites;

I thought there were just worms but alas – there are these worse things and the common worm treatment does treat them. These parasites are called dientamoeba fragilis (DF) and blastocystis hominis (BH) – single celled protozoa that live in the large intestine. DF are found in the gut of gorillas, pigs and humans. BH is more widespread and more researched but they knowledge has only really come to the fore in the past 10 years to know the effects and how to treat them. 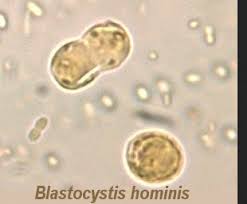 How do you get a parasite?

Basically by eating contaminated food or drinking water. You can’t see them, but they are everywhere – on your fresh fruit and vegetables or in your water or on the door handle of the toilet. They are like the trifids – they are everywhere are coming to a gut near you! Scientifically, they are found on surfaces or in soil, food or water that have been contaminated. The parasites have a hard outer shell and can survive outside the body for long periods of time. They are ingested and multiply in human’s large intestine. Poor sanitation and hygiene, travel to infected areas and contaminated water are the most common ways.

How do you know you have a parasite?

My child was telling me his food was making him feel sick and he had lost his appetite. He also had blackened rings under his eyes, was tired and irritable and then had a little rash just under his bottom lip. So I took him to the doctor – and had to scoop his poo out of the toilet which was more than disgusting and the doctor could hear me dry reaching three rooms away! Other symptoms can be abdominal pain, diarrhea, constipation, gas, upset stomach or nausea. It can be acute or chronic. 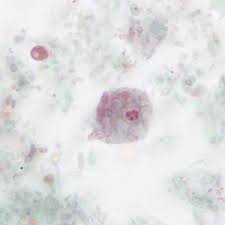 Why are they so bad?

Some reports suggest they are nothing to worry about. But my doctor thinks otherwise.

If they are chronic, they can lead to poor nutrition intake and even undernutrition. This lack of nutrient intake affects all sorts of things, including behaviour, concentration and sleep and can then have dire effects on learning and attention. A study published in the Journal of Tropical Medicine and Parasitology found that parasitic infections combine with nutritional deficits to impair the efficiency of cognitive processes. As there are sometimes little indicators of a parasite, it got me thinking about how many children actually have them and how they are playing out in the classroom. As it can affect attention and behaviour, are we mistaking it for ADHD or other behavioral problems? And as it is becoming more of a problem in the Western world, is this accounting for the increased lack of attention of our classrooms? I have noticed my sons mood change over the last few months and his attention in school change. I had a meeting with my sons teacher for the first time since he has been at school about lack of attention – and now I think I have found why. If there is a parasite sucking out all the goodness we put into our children, how can we expect them to learn and sit in class for six hours each day?

Now we change my sons diet and use antibiotics. I have cut out sugar as the parasites feed on it. They ferment sugar and make my boy feel sick. I have also reduced his starch intake – no potatoes, less bread, no pasta to see if that will help. And reduced dairy which so far seems to be helping. Then one week after his antibiotics, I again scoop his poo. I am already dreading it.

So now I know why I tell the kids to wash their hands after being outside and before eating, wash their fruit and vegetable and don’t put their fingers in their mouths. The whole idea of eating a parasite makes my skin crawl.

And lastly, anything you want to know about a broken arm? 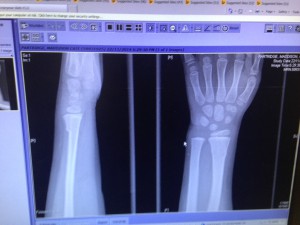 It was always bound to happen. My youngest daughter is a climber, swinger and dare devil. The amount of times I have said to her ‘be careful’ is ridiculous. The night before, the neighbourhood kids (including ours) had pulled a park bench close to a tree branch and were standing on the bench and swinging from the branch. The next day, my daughters went out just before dinner time to have another go on the swinging branch. My littlest daughter slipped and landed on her wrist. I could hear from the scream in my other daughters MUUUUUUMMMMMM… that there was something wrong. And sure enough – her arm was broken = a trip to emergency.

Maddie walked in and said to the nurse – ‘I think I have broken my arm’. The nurse was taken aback at how brave she was! It was actually pretty cool seeing the growth plates in my daughters hand on the X-ray. She has large plates in her elbows and wrists and also in each knuckle on her fingers. They will not be fully grown until she is 18 years old and has stopped growing. Hard to believe really.

My daughters break was ONLY a buckle fracture which means there was no clean brake but a fracture from one bone pushing on the other side of bones. Phew then! She has a brace on and according to the doctors it will heal so quickly and I will apparently know when to take it off.

After I took her to the hospital and she was perfectly fine about it, I wasn’t so fine. My daughter had broken her arm and I didn’t protect her from it. I had serious mummy guilt and think I went into a bit of shock for a few hours after about what had happened.

But the doctors were nonchalant, I had no idea that a broken arm was no big deal really. I took her to the fracture clinic the next day on instruction from Emergency and after an hour and 15 minute wait – they took one look at the X-ray and told me it was a common break and would heal and no need for another x-ray or any further follow up – 30 seconds later and we were on our way. So it is my job to know when it is better. Bizarre.

I could have done without any parasites, planter warts or broken arms right now but somehow, these things just pop in when you least expect it with kids and you deal with it right!

4 Responses to Planter warts, parasites and a broken arm